First and foremost a road bike is supposed to be light. Each and every single component of a high-class road bike literally gets weighed on a gold scale. The fact that an entity is not just a sum of single individual parts becomes very clear as soon as one gets to ride a bike. By means of perfect adjustment, optimum proportions, enabling technology and exact range of application a new entity is created. This applies to all categories of bikes, in particular the road bikes. No unnecessary detail can be allowed to increase the total weight of the bike. Gravel bikes are also subject to this dogma. Does it mean no fenders? Really? Not even if they are made of Flexi-Carbon-? The Flexi-Carbon-English: In this article you will find product information. Due to German law we have to call it commercial. But we feel responsible only to our readers.

German Version of this story.

For a professional road biker it is a matter of milliseconds between victory and defeat, therefore get rid of valve caps, lacquer finish, tools. For an average biker practicality is essential, which means that getting rid of the aforementioned utensils would not be advisable as there probably will be no escort vehicle around during your bike tour. Even fenders do make perfect sense in autumn, winter and spring, provided you are not chasing a Strava-KOM-prise. Particularly on a gravel bike or during your daily ride to work, fenders definitely do more good than harm. Well, bring it on! Put under the microscope and weighed on a gold scale they make a difference of 51,9 grams. This was “Breaking taboos” No. 1.

Carbon is an extremely light and strong material, but one thing it is not: flexible. At the event “Augsburg gründet“ (Launching in Augsburg) an owner of a bike shop showed up and presented bike fenders made of carbon. These fenders are highly flexible and can be twisted like paper streamers – well, maybe not quite (see image above). This certainly qualifies as “Breaking taboos” No. 2. Gabriel Kenzel-Muntean, the founder of Flexi-Carbon, has been able to significantly modify a few processes in his “carbon-bakery”. The results reduced the carbon specialists to despair, including professors of material science and similar in Augsburg, the heartland of carbon processing.

We at born2.bike are affectionate fans of this new material! Luckily our affection was returned. We were chosen to test the exclusive material and for that purpose we had the perfect bike Simplon Inissio at our disposal. Herewith we exclusively present to you the unique material flexi-carbon. The fender carbon has another special feature: its inner surface can be varnished in different colours, e.g. red, blue or yellow, to match the given colouring. Accordingly a suitable dark red colour was chosen for the Inissio bike. We are happy to be able to report about this extraordinary material developed by our new sponsor. Its weight is insignificant, but its usability is grand. On the left side you can see a picture of Gabriel and his team. By the way Luca Morell (leftmost in the picture) is now also part of born2.bike team. He specialises in rapid prototyping, freeriding and video production. You probably have already seen some of his videos on Instagram.

After having mounted the carbon-fender we also chose suitable fender mounts made of carbon and aluminium. One mount weighs 27,9 grams. During the following test ride it becomes conspicuous that nothing conspicuous seemed to occur. Now in winter time the streets and especially forest tracks and gravel paths are mostly damp and muddy. After even a short bike ride without a fender it is often difficult to see where the biker ends and the bike begins: they blend into homogenous beige and brown bulk. Our fenders simply did their job and held off the mud. Our aim was for the fenders to cover up as big a surface as possible for optimal protection to enable using the bike to ride to work. Since the fenders are extremely light, vibrations are reduced to the minimum. Of course, carbon fenders can also be mounted on road bikes (insofar as required drill holes are available). In this case the flexi-carbon fender will probably need much more “aero-trimming”. It should also be much shorter to prevent unwanted swirling, to serve primarily as a small mudguard. Fenders used during a race? Definitely not! Therefore we just stick with the longer version. An eye-candy and no mistake! We are looking forward to receiving your comments! Note: Flexi-Carbon-English.

We are proud and happy to share Gabriel’s annotation regarding our inspired cooperation: „End of 2018 we became a sponsor of born2.bike, as we became aware of the amazing effect impassionate words can have in the bike world upon the readers as well as for Google and social media positioning. All born2.bike texts, pictures and videos are charged with so much positive emotion that one simply feels the urge to become part of this world. We very much enjoy being a sponsor of born2.bike!“ 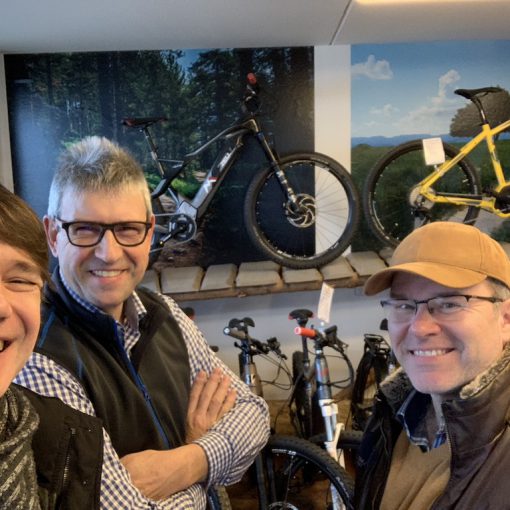